They call it the “firefighter mechanism.” Some refer to it as a mentality—something unique to the highly trained individuals in the fire service. It’s the ability to shed emotion, disregarding the fundamental human instinct to avoid fire and, instead, make the conscious decision to run into a disaster in hopes of saving someone from it. In the flight-or-fight scenario, firefighters live up to their namesake. But doing so sometimes comes at great personal cost.

Meet Duane Wright, Rob Kokko, and Steve Halliday. They have experienced the same trials and tribulations as other burn survivors, but from a slightly different perspective.

“Any survivor will be able to relate to another survivor in some way,” says 43-year-old Rob Kokko. Injured while on a call as a volunteer firefighter, Kokko adds, “It’s also nice to have someone who walked in the same shoes. [Firefighters] know things can change on a whim.”

In March 2000, Kokko responded to a 2 a.m. call for an arson related apartment fire. Spotting an elderly woman in a second story window, Kokko and his friend, and fellow volunteer, made the decision to act. They found the woman by following the sounds of her coughing. As Kokko threw her over his shoulder and they headed toward the door, the structure collapsed over them.  A wave of high heat “blew through our bodies,” recalls Kokko. The elderly woman was lost and the firefighters’ air was beginning to run low. “We knew we were burnt, but not how bad… that’s when the firefighter mechanism kicked in.” 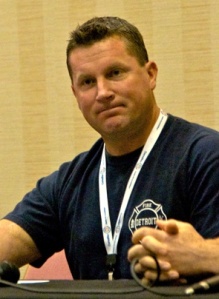 At the Phoenix Society's 2011 World Burn Congress, Rob served as a panelist at the special session "In the Line of Duty: Open Forum for Those Who Serve."

Attempting to escape in the confusion of smoke, Kokko and his partner found themselves trapped—dead-ended in the apartment bathroom. They broke the tiny window, but were unable to fit through. Kokko’s partner got hung up trying to get out the window and lost his mask. By the time a ladder was brought and the two volunteers were pulled from the building, Kokko had suffered third-degree burns over 35% of his body, including his hands, upper back, scalp, and ears.

He had managed to keep his mask on, but still received significant smoke inhalation injuries. Kokko’s partner passed away on the scene.

While in recovery at University of Michigan’s Trauma Burn Center, Kokko suffered bouts of injury-related pneumonia. For nearly 5 years following the incident he had to undergo regular lung x-rays to monitor his healing. Muscular atrophy also limited the use of his right hand and arm.

It was a visit by a fellow firefighter and burn survivor that encouraged Kokko to adhere to his doctor’s demands. “He told me ‘I got through this, you are going to get through this.’”

After 15 months of surgeries and the accompanying physical therapy, and a year of that time spent in pressure garments, Kokko was able to return to his job as a truck driver.

The Phoenix Society is able to offer the tools and resources burn survivors need to thrive again through your support! Donate today!

During recovery, Kokko also spent a lot of time on the Internet where he discovered multiple outlets for burn survivors, including the Phoenix Society. Soon after, he was attending his first World Burn Congress (WBC). It was an eye-opening experience. “Seeing people who have gone through so much worse really puts things into perspective,” he says.

Kokko admits that early in his recovery he sometimes wondered, “Why me?” and even blamed himself for what had happened. However, after attending WBC, his thoughts changed. “I realized I did everything I could. I could not have done anything different. This happened, and now I have to deal with it.

After the death of his partner and friend, Kokko thought that returning to firefighting would be impossible, “No way am I going back to that. Not now.” Through the experiences shared by others, Kokko learned that his injuries were not life crippling. He met other burn survivor firefighters and was inspired to pursue the job he loved full time.

Kokko has since gone through the training for the Phoenix Society’s SOAR (Survivors Offering Assistance in Recovery) program in an effort to give back to a program that helped him through so much.

This article can be read in its entirety in Burn Support News, Issue 3, 2011.
Join our mailing list to receive BSN.